The Controversial Grind: Whaling in the Faroe Islands

Annual catching and killing of dolphin and whale species in the Faroe Islands dates back to 1584, for human consumption. Species include Pilot Whales, Bottlenose Dolphins, and Atlantic White Sided dolphins. An average of 800 pilot whales are captured and slaughtered each year, raising speculation and controversial debates nation wide.

As a long term volunteer with the Atlantic Whale Foundation, my view is inevitably going to be biased towards what I would describe as inhumane and cruel depletion of these beautiful mammals. In this article however I plan to provide you with facts and statistics for you to create your own view and perception without influence.

The Faroe Islands, a self governing nation owned by Denmark,are in the middle of the North Atlantic Ocean and  relies heavily on fishing and agricultural industries which includes the human consumption of pilot whales to sustain the 28,000 residents who inhabit 17 of the 18 mountainous islands forming the Faroe Islands. Using all local resources and produce is seen as environmental and economical to the Faroes inhabitants; understandable, but to what extent?

Although owned by Denmark, the islands are an autonomous province therefore whale hunting, also known as The Grind, or ‘Grindadrap’ translated to mean ‘long finned pilot whale killing’ remains annual tradition. To the Faroese people, a boy is traditionally thought to become a man when he kills his first whale, but just because of tradition, does it make it acceptable for the mass slaughter of harmless intelligent cetaceans? On the other hand, the Faroese people have always relied on pilot whales as a continuous meat source, just like the British have relied on the constant consumption of pork, beef and poultry.  Whilst there are other countries still active in engaging with whaling like Japan, Greenland, Iceland, Indonesia, Norway and Russia, this article focuses specifically in the Faroe Islands because it is the most controversial of the 7 countries involved in whale consumption. The Faroese believe that whaling for them is sustainable, as they monitor how many they kill, claiming to kill only 1% of Atlantic Ocean pilot whales per year.

‘It is sustainable, the main purpose is for food’

In reference to the above quote from a Faroes inhabitant, whale meat is actually considered highly poisonous containing chemical pollutants harmful to humans. Fortunately this has resulted in a slight decline of whaling, however thousands are still killed and the debate continues on whether it is sustainable.

If undecided already, this video below should determine your thought processes on the issues of whaling. Filmed in 2010, a pod of Long Finned Pilot Whales are driven ashore by fifty or so boats, panicked and scared with no hope of survival, and each one slaughtered by welcoming Faroes men and children on the shore. How sustainable can this really be?

Argued as unsustainable, inhumane, and cruel, to what extent can the Faroe Islands argue that this is in their tradition and they need the meat to stay alive? How far must the world go to please it’s inhabitants? Without the relative same rules and regulations for nations worldwide, people will continue to exploit the planets natural resources and wildlife unsustainably, and to their own desire. Where do we draw the line? These intelligent cetaceans belong in the Atlantic Ocean and should only observed in the most natural way possible; not exploited and cruelly killed for so called ‘tradition’.

Previous post The Killer Inside Me - A good or bad film? 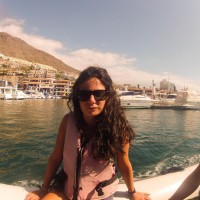 About the Author Sarah Pritchard