On DVD: The Ides Of March 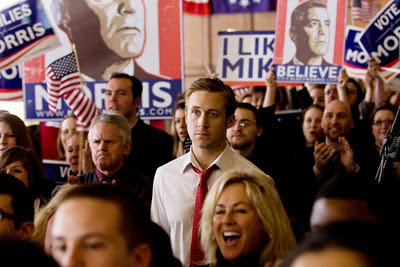 Good, dirty fun. George Clooney is a much better director than Clint Eastwood, but he gets no respect. I don’t get it. He makes small, intelligent films with complicated characters. What’s not to like? The Ides Of March is a zippy, nasty little movie about the queasy filth that is politics; well directed, elegant and with a splendid cast. Why doesn’t Clooney get the love, I don’t know. He has the good sense of hiring Paul Giamatti, Marisa Tomei, Phillip Seymour Hoffman, Jeffrey Wright, a stellar cast, all excellent. And he is not even the main character. He plays a Democratic presidential candidate named Mike Morris, but the main role belongs to Morris’ strategic advisor, Stephen Meyers, played by Ryan Gosling.

Gosling is very good. He starts out as a brilliant strategist who also happens to believe in his candidate, until his heart is broken by disillusionment and betrayal, of his own doing. He makes the grave mistake of listening to the siren’s call of Paul Giamatti, who is the campaign manager of Morris’ adversary. Nobody in this movie is pure. Everybody makes mistakes and craves either sex, money or power. But in campaign politics mistakes of a human nature are costly because everything is a front. It’s all about appearances. Everything appears to be immaculate, but everything is tainted in some way or another. In order to win, people resort to bad tactics. Integrity is impossible.

Yes, the plot points strain credulity. For those of us who would not touch politics with a ten foot pole it’s hard to believe that victories are achieved through extorsion; that Ida Horowitz, a journalist for the NY Times (Tomei, encased in boxy coats, glasses and Uggs, and still sexy), would threaten to run a damaging piece in exchange for information. That a Senator from North Carolina (Jeffrey Wright) would demand to be Secretary of State in exchange for his crucial endorsement, that a simple little meeting of Gosling’s with Giamatti would make the entire house of cards collapse, and more fatally, that an intern (Evan Rachel Wood, better than usual) would find a tragic end over the appearance of impropriety. But somehow, these excesses are forgivable because the movie zips along, the cast is fantastic, including Clooney, who’d be my real president in a heartbeat, and because Gosling’s dilemma is very compelling. The movie works because it holds steadfast to its own theory: that politics are dirty and ruthless. It does not change its mind and decides to appease anybody’s moral conscience or make the audience feel good. Stephen Meyers is an antihero who ends up getting what he wants, by losing everything that is important and not at all in the way he wanted it. Gosling convincingly transforms himself from an enthusiastic believer to a bitter, cynical man bent on revenge.  A smart, brittle film. Very enjoyable.