Time To Kvetch: The Oscar Nominations Are Out! 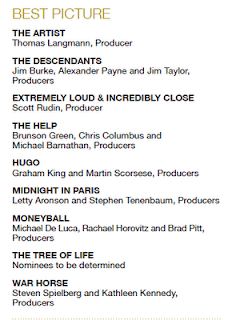 Good news is, The Tree of Life made it to the Best Picture, and so did Terrence Malick and cinematographer Emmanuel Lubezki. Also The Artist, which is the best movie this year except for A Separation. I’m rooting for it.

The Descendants is a perfectly decent movie, but for some reason I liked it much more as I watched it than afterwards. Afterwards, it became a little meh. The Artist should win this year, but it’s a toss up because these people vote with their ass most of the time. They are entirely capable of giving it to The Help.

Bad news is that a movie that most critics hated, Extremely Loud and Incredibly Close, inexplicably made the list. There is nothing more unpalatable to me that having Sandra Bullock and Tom Hanks in the same movie. I can watch them both separately no problem, but together it’s overkill. Bridesmaids is the much better choice. The Help utterly sucks. But the Academy members are a bunch of sentimental old farts who want the movie business to be bathed in corn and good intentions. Midnight in Paris is the best stuff Woody Allen has done in years, but I don’t think it merits a best movie nomination. I have not seen Moneyball, Hugo or War Horse. 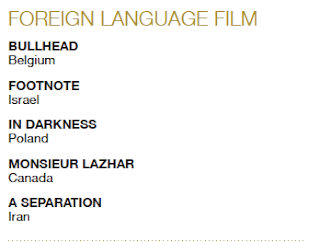 Good news is, A Separation, from Iran, the year’s best movie, also got an original screenplay nod. This is the movie that absolutely needs to win Best Foreign Film. And if it wins original screenplay too, for which it got a surprising and well deserved nomination, all the better. I’m very happy the academy did not nominate The Skin I Live In from Almodóvar (he’s his own country now), because it sucks.

Bad news is that Footnote, an annoying, overproduced Israeli movie, made the nominations too. Lars Von Trier’s Melancholia should be here. Alas, he is now persona non grata. Miss Bala from Mexico stood a chance. But this category never really represents the best of foreign cinema, except in the case of A Separation, which is truly a spectacular film. 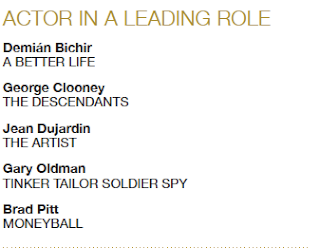 Good news is Demián Bichir made to the best actor noms (token Hispanic, maybe?). I have not seen the movie but I hear he is great. He’s always been a good actor. Terrible, unbelievable bad news is that Michael Fassbender, who gave the performance of the year in Shame, was not nominated. Somebody read these people the riot act. I would substitute him for Gary Oldman, who barely appears in his own film (sorry, Cathy!). I think this one is between Dujardin and Clooney. And if so, let it be Dujardin. 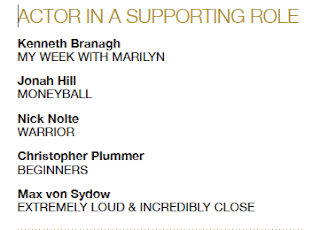 Good News is that Kenneth Branagh got his nod for playing Laurence Olivier in My Week With Marilyn. Good for Nick Nolte and Jonah Hill. Bad, incomprehensible news is that Viggo Mortensen did not get a nod for his believable, awesome Sigmund Freud in A Dangerous Method. Or Kevin Spacey in Margin Call. This category was rich with fine performances this year, and yet the Academy votes are most predictable. Where is Eddie Redmayne for My Week With Marilyn, Corey Stoller for his Hemingway in Midnight in Paris? Albert Brooks for Drive? Or Robert Forster for The Descendants? Boring. 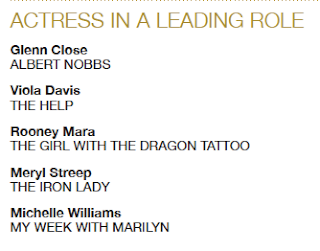 Good news is they are all good. Good for Rooney Mara, good for Glenn Close, Aunt Meryl, etc. Bad news is that Elizabeth Olsen from Martha Marcy May Marlene should have been nominated, and Carey Mulligan as well for her work on Shame.  Also, terrible, terrible slight not to nominate the outstanding Kristin Wiig of Bridesmaids. She deserves to be here. This one is between Meryl Streep and Viola Davis. 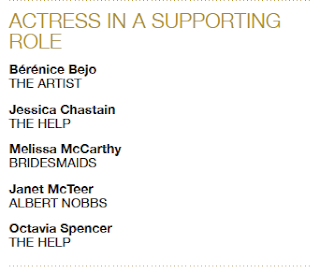 Good news is Melissa McCarthy is in for Bridesmaids, and the rest of the category is solid. Bad news is Vanessa Redgrave, who gives the supporting performance of the year in Coriolanus, is not here (unless she counts for next year). Sissy Spacek was dead on perfect on The Help. Where is she? I’m not hazarding a bet, but Octavia Spencer is a possibility. 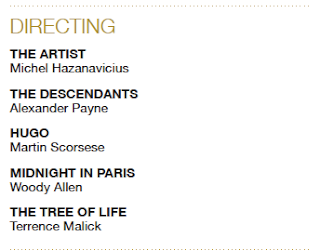 Good news is this is a good and worthy group. As far as I’m concerned, the two worthiest contenders are Hazanavicius and Malick, and if either one wins, I’ll be ecstatic, edging towards Hazanavicius. Bad news is I’m down on Woody Allen, whose movie is very uneven. Asghar Farhadi, director of A Separation should be here as well. 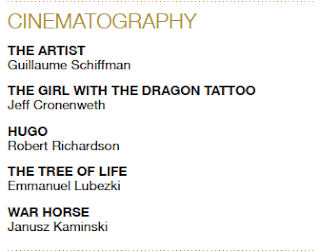 Good news is go, Emmanuel Lubezki, as far as I’m concerned, absolute front runner for his astounding work in The Tree of Life. Bad news is Manuel Alberto Claro who did the cinematography for Melancholia should be here. I also loved the work of Sean Bobbitt in Shame. 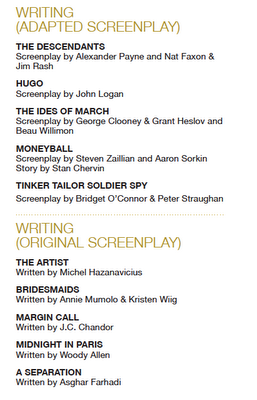 Adapted screenplay I have no good news to report. I have only seen The Descendants and TTSS, and that screenplay seemed to me to be quite problematic. I’m hoping Coriolanus qualifies for next year, because it is one of the best adaptations of Shakespeare to the screen. Why is Jane Eyre not here? That was a solid adaptation. Carnage the film was so much better than Carnage the play. But Polanski is poison.

On Original Screenplay there is plenty of good news: YAY! Annie Mumolo and Kristin Wiig! Bridesmaids got a very well deserved nod, and so, surprisingly for a foreign film, did A Separation. The Artist is brilliant. Bad news is I think Margin Call is a terrible screenplay and Midnight in Paris could be better. Sean Durkin’s script for Martha Marcy May Marlene was better than either one of them. 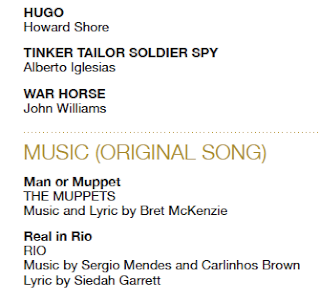 The good news is there are only 2 nominated songs! I will be happy when there are zero. Of course rooting for Brett McKenzie and his lovely Muppet song, because the bad news is the Rio one sucks.  As for the score, the good news is The Artist should win because it is the score of a movie without words and it is incredibly well done. The bad news is that I hated Alberto Iglesias’ score for TTSS. Wrong choice of composer, the music sounded exactly like his last three Almodóvar movies. Trent Reznor and Atticus Ross should be here for their effective work for David Fincher.

Let the griping about the Oscars begin!

Next post Dry the River - Chambers and the Valves