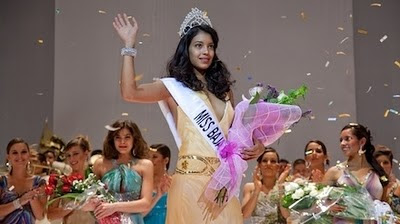 Although it is described as an action thriller, what Miss Bala does best is make palpable the feelings of fear, revulsion and violation that Mexicans have been grappling with since the dawning of era of the war on drugs.

Laura Guerrero, (Stephanie Sigman), lives in Tijuana with her father and brother and dreams of entering the Miss Baja California beauty contest. In a flash, her world is upended when her best friend Suzu is caught in the crossfire of Lino, a drug lord (Noé Hernández) who storms a sleazy nightclub and sprays everybody with bullets. Laura hides in the bathroom, but he nabs her and spares her life in exchange for criminal favors. Suzu has made acquaintance with some shady guy and that’s how it all starts: you come near someone with “connections” and next thing you know, either you are dead or there is no way out. Written by Gerardo Naranjo and Mauricio Katz as a nightmarish version of Alice in Wonderland, and directed with panache by a much improved Naranjo (I’m Gonna Explode), Miss Bala portrays a country that is completely defaced by crime and corruption. Things are beyond outrageous, but that’s how things are. Lino has unchecked power: he and his gang roam the streets of Tijuana armed and unimpeded, they close streets, plant bombs, massacre people dancing in nightclubs, have gunfights in plain daylight, buy their arms from a gringo on the other side of the border, and can even fix state beauty contests. Nothing is outside their purview of terror and nobody can refuse or resist it. What unfolds, is in fact, something that looks like an actual war. You would think you are in Baghdad, but this is the new normal.

Mexico is a surrealistic country and its particular war on drugs has Mexican surrealism written all over it (the cult of the Santa Muerte, narcocorridos, the grotesque violence). In the movie, as in life, bodies are dumped in front of the US consulate, strung from bridges. This movie is far less violent than what goes on in reality (decapitated heads appear in Acapulco beaches, people are burned inside casinos). Even though the movie feels tremendously violent, there is little graphic violence, a great directorial choice. Miss Bala depicts the ascendancy of the drug cartels as de facto rulers of Mexico through the point of view of Laura, showing it as the rape of the country that it is; for Laura Guerrero, in my view, symbolizes Mexico. One good day she finds herself in a gruesome nightmare and she has no idea how the hell she got there or how will she ever get out.

Everything outrageous that happens in Miss Bala is credible, and Mexicans will recognize this tragic state of affairs almost with a shrug. It is the realism of the surreal. There are a couple of plot points that strain credulity, chief among them the fact that no one in Mexico, unless they are five years old or just flew in from Mars, voluntarily goes inside a patrol car with a policeman. I could suspend disbelief because the movie establishes that Laura, who does this, is desperately looking for her friend Suzu, and she makes the grave mistake of asking the police for help. This particular cop works for Lino (who doesn’t?), and soon she is spirited down the rabbit hole of the drug business.

The organizational skills of Lino’s gang are amazing; I wondered if they ever actually had time to run the profitable side of their business, busy as they were killing other gangs, exacting petty but bloody revenges and orchestrating symbolic gestures of terror.

The movie works like a charm until the end of the second act, which takes place at the state beauty contest, with a scene of marvelous, piercing irony. Laura gets what she always wanted, though not the way she wanted it. The movie could have ended there but there is a final chain of escalating humiliations. Suddenly, we understand Lino’s contest-fixing motivations (although the deals he makes are not entirely clear to me), and the war on drugs is uncovered to be an enormous farce, staged with the bottomless cynicism of those with power, for the duping of Mexican society and of our neighbor to the north, whose gargantuan appetite for illegal drugs is largely the cause of all this misery. I understand the filmmakers’ decision to take the story to its natural and extreme consequences, which is to say that the war on drugs is a losing proposition because many of those who are supposed to be fighting it are actually abetting it. In terms of storytelling, however, it feels redundant, even as the bitter ironies of Laura’s brush with the drug cartel keep piling on. In the end, although the story could benefit from more clarity, what boggles the mind and is very effective, are the endless layers and implications of moral rot of everything we just witnessed. Mexico is literally being raped and betrayed, and sinister forces are in cohoots to strangle it.

Miss Bala is being marketed as an action thriller, but a movie with a heroine who is forced to commit crimes in order to survive is not your typical action flick. Usually, films with passive protagonists are hard to watch because if the heroes are not the agents of change, it’s hard for the audience to care. But Miss Bala works as a fable, because Laura is put in a situation in which she has do what Lino orders; otherwise she’s toast and so is her family. Her dilemmas become existential. No matter how she slices it, she is drowning in rot. The suspense comes from wondering if Laura is going to summon some sort of integrity and stop being a slave to Lino, and whether this is even feasible. To the movie’s credit, it steers clear from cliched heroics and wishful thinking. There is nothing that Laura or anyone can do to stop the putrefaction. When she does try, her motives are less decency or integrity than revenge, revulsion, and reaching the limits of human tolerance of humiliation and depravity. What happens to her embodies the sense of shock, revulsion and mainly of impotence that is gripping the country. Similarly, the drug lord’s character summarizes the ambiguity that some Mexicans feel for the societal cancers that are the narcos. He seems to have protective feelings for Laura, but they are just his way of playing God. He can grant her life, riches, miracles, just as easily as he can send her to the lowest depths of hell, or kill her and her entire family. In the end, he is a user and an abuser, and there is nothing in him remotely approaching redemption, which is as it should be. Some Mexicans’ admiration for the moxie of these barbarians is not only puerile, but tragic. Miss Bala makes clear that there is no sense of honor in these gangs, just unspeakable, depraved cowardice.

This movie poses an interesting conundrum: it aims to thrill and entertain, while at the same time it argues a sober message about the reality of the Mexican war on drugs. This is not in and of itself contradictory; a movie like The Hurt Locker is a perfect example of a great action movie that is also a serious anti-war movie. Yet in the case of Miss Bala, something feels amiss. Perhaps the titles at the end stating the number of victims and the billions of dollars reaped by the cartels are unnecessarily preachy. I enjoyed it very much as an acute and accurate metaphor of Mexico today, but I never felt I was watching a crime caper or an action thriller. It is way too tragic for that.