The Latin American Art Museum of Buenos Aires (MALBA), which is characterized by its eclectic programming appreciated by the cinephile public, is dedicated to independent cinema. Besides the classic projection of Fritz Lang’s Metropolis restored to its original version -with live music-, in April the MALBA presented a Series of Contemporary Chilean Films, scheduled by the Argentinean actress Antonella Costa, and sponsored by the Department of Cultural Affairs of the Foreign Ministry of Chile (DIRAC).

The series was attended by Matias Bize, Paola Lattus, Pablo Cerda, Renato Perez, and showed a highly encouraging picture about Chilean film production; an original cinema, creative, and with a strong, consolidated identity.

It is difficult to highlight one film, because all of them were rather well chosen by Antonella Costa, featuring a variety and interesting movies. While all the films were released in the last two years, one of the last productions presented was The Year of the Tiger, the third production of Sebastian Lelio, which features the experiences of a man who escapes from prison because of the devastating earthquake  that struck the Chilean coast. Filmed few days after February 27th 2010, in the naturally devastated settings, the film is impacted by the crudity of the images and the desperate life of its protagonist. It is a very well made “chronicle of a fate foretold”.

The winner of the Goya for best Latin American film 2011, The Life of Lish, directed by Matías Bize, was also presented in the series, and was one of the most commented about films by the general public. In one location (as in other films of director), the film manages to unravel a love that could not be, and how we can be stuck in past decisions.

The series also included Country Music (Música Campesina),by the writer and filmmaker Alberto Fuguet, Zoo (Zoológico) by Rodrigo Marin, Anonymous by Renato Perez, Mitómana by Adriazola and Sepulveda, I want to enter (Quiero entrar) by Robert Farias. The clausure function of the cycle was in charge of my Last Round (El ultimo round),directed by Julio Jorquera, leaving a positive approach, bringing Latin American Cinema for a Latin American audience. 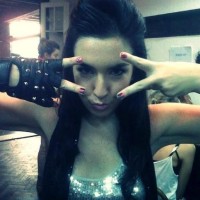