That’s right, everybody! It’s that time of the year… not Thanksgiving, not Christmas, and sadly not my birthday (until next year). It’s October, and it’s time to celebrate Halloween!

Yes, I’ve always loved Halloween! My favourite holiday! Of course there’s all the spookiness and the trick-or-treating which make Halloween fantastic, but my absolute favourite thing about Halloween is to wear a costume which would impress people! When I was a kid I dressed up as characters like Cleopatra, a Flapper girl, Wonder Woman, etc. Unfortunately I haven’t come up with a better costume since my pre-teens. I’d always have last minute additions, and most of the time (if not, all the time) they were pretty lame. Why? Because sometimes I didn’t know what to dress up as, sometimes I wanted to make my own costume (to no avail), and sometimes I just lacked the creativity or time to think about it. So what could I possibly dress up as? A pop singer? Nah. A princess? Nah, I love princesses, but it’s overrated. A sexy/slutty something? Heck no! So what do I dress up as this year?

Well, this year I’m going as Kate Middleton, which I’ll talk about in a second.

Although this kept me thinking: what about other women who want to come up with a costume? While guys can also have trouble coming up with a costume, women struggle the most with their costumes because their options are usually limited to princesses and sexy/slutty somethings, which is why I’m focusing specifically on women this time. What if we’re running out of time and wanna come up with a last-minute costume? What if we have no time or money for a costume? Or what if you just don’t want to spend like 40 pounds for a costume? How can we create a costume without looking repetitive, uninspired and uncreative? Some people just put on a red shirt and then put on horn ears, or a black shirt and cat ears. Some people put on an old white T-shirt and pour some fake blood on it. Come on, ladies! We wanna be a little more creative than that! We wouldn’t want to be boring, wouldn’t we?

You want materials you can either get for about 20 pounds or less, or find in your closet. Believe me, with some creativity, you could even have a few costumes on a shoe-string budget (or a dental-floss budget). It doesn’t have to be exact, as long as it’s recognisable. As for make-up and hair, I’m sure you can find tutorials on YouTube to recreate the look. I don’t want to keep repeating myself with how to do your hair, but believe me when I say that there are some amazing tutorials I found on YouTube. You also have the option of dying your hair or buying a wig. With that said, here are my Top 10 Easy Halloween Costumes for Women! Let’s bring it on, in no particular order: 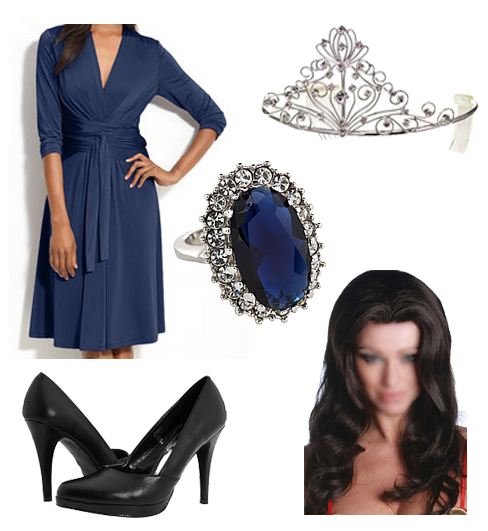 Kicking off our list is the Duchess of Cambridge herself in her iconic blue engagement dress. As I said, this is my costume for this year’s Halloween. I have a blue ring from Claire’s which is similar to the engagement ring that Kate has (the one originally worn by Diana), the blue dress, and I’m just missing some black heels, but they can be a different colour as long as it matches the dress. My hair is already a bit similar to hers, and I’m planning to use rollers to recreate her curls. Basically if you got brown wavy hair like Kate Middleton, the most likely you could pull-off this look (Anne Hathaway was pretty dang close in that SNL sketch!) You can also get a Kate Middleton paper mask anywhere. The tricky part for me was to find the dress, partly for the price, but also finding the right shape and colour. It doesn’t have to be an exact replica, but it’s iconic: we want a blue, V-neck, long sleeved, knee-length dress or something similar enough. It would also help if you had a friend of yours dress up as Prince William, as there’s a chance that some people might not recognise your costume.

2) Dorothy Gale from The Wizard of Oz Right, if you’re not a fan of painting your face entirely green, or pink poofy dresses, here’s another popular Wizard of Oz character whom might be of interest to you. Dorothy doesn’t need the white shirt underneath her dress, as long as the dress has the same light-blue and white patten, and has this sorta farm-girl-vibe. What else do you need but her pigtails with ribbons on it, a basket, and some red or sparkly red shoes to re-create the ruby-slippers in the film. If you can’t find red shoes, you can use silver, as it was originally the “silver shoes” in the books. If you have a doggy to play the role of Toto, lovely, but you can also use a dog plush toy. You can even use the basket as your trick-or-treat bag!

3) Emma Stone as Olive in easy A This is possibly Emma Stone’s most iconic character, from the movie easy A. I was actually about to dress up as the character at one point last year, and actually had cut-out the bright red “A” for it. But there were a few problems, such as not being able to get the top, so in the end I didn’t go as Olive. What you most need, and what you could probably find in your closet (or someone else’s closet) is a Ray Bans sunglasses, a cut-out of the red “A” which you stick on, black leggings, black or red high heels, a pearl necklace, and a black corset or tube top, and you’re done! A black tank top is fine as long as it makes you look slutty enough (that is the intent of the outfit, after all).

4) Rosie the Riveter from the “We Can Do It!” poster The always popular feminist icon! I don’t know how popular this costume’s been over the years, but she’s a character you can definitely dress up as. And it’s really easy: since the poster by J. Howard Miller only shows the upper part of her body, you just need the blue shirt and the iconic red bandana (and at the bottom maybe some jeans, or something matching the time period). Then finish it off with the hairdo, some make-up, and voilà!

Do you think you can re-create the look? Well, as Rosie always says: “We Can Do It!”

5) Audrey Hepburn as Holly from Breakfast at Tiffany’s By that I mean the outfit with the long black dress and tiara. You can easily find the accessories in something like Claire’s or Accessorize: the tiara, the necklace, the black gloves, etc. You need a preferably long and slim black dress (but it can also be short), some sunglasses, glamorous black heels… and that’s pretty much it. If you want to go a little further, get the cigarette holder online or something similar-looking. And maybe you can stop by Starbucks and get some coffee and pastry on your way to the Halloween party to match the character!

Yes, you can’t go wrong with this elegant-looking character. But if black’s not your thing and you want to be more bright and colourful:

Well, yeah, everybody dresses up in these neon bright colours, and you can especially find bright coloured accessories in Claire’s. Really nothing much else to say there. I know some people throw on bright colours just out of laziness, but you CAN have a lot of fun with the costume if you get the colours, make-up and hair just right. I was originally gonna go this yeah as Vanellope von Schweetz from Wreck-It-Ralph (man, this movie is awesome!) and I actually found a really good hair tutorial on YouTube. (Here’s the link to the vid: http://www.youtube.com/watch?v=OM1ga23Xo3g). Maybe next year I will. You can have tons of fun with the hairdo, and this tutorial mentions that you can even use real Twizzlers to tie around your ponytail! The hoodie doesn’t have to be a bright-mint colour if you can’t find one, and something like light-blue or bright pink can be cool. It’s a short budget costume while still being a recognisable character, with her unique-color-scheme and especially the hair which gives it away. I’ll have Velma as an honourable mention. It’s not that I don’t like Velma. It’s just that I think it’s easier to find something that Daphne wears than what Velma wears. You all know Daphne: green scarf, pink stockings, and her purple everything! Purple dress, purple headband, purple shoes, etc. The green scarf I don’t think you need, but it is preferable. Try to avoid Sara Michelle Gellar’s version of the character, because we’re all more familiar with the original cartoon version.

9) Tintin from The Adventures of Tintin The only male character from the list, but still a great costume that anyone can wear. I just LOVE Tintin! I would totally dress up as Tintin if I had the chance! You might say that this is only for women who have short hair and can shape their hair into the iconic quiff… not necessarily. You can put on the rest of the costume and people can still recognise Tintin’s attire, so it’s not entirely limited. For Tintin’s costume, you’ll need the beige trench coat, the white collar shirt/blouse, the light-blue sweater, the brown plus-fours (or brown pants which you can pull up), white socks (or black like in the film), and his shiny black shoes. But the character is not complete without his dog companion Snowy/Milou, so the last piece of this costume is a Snowy doll (I’m quite positive they still sell the Snowy dolls in Waterstones, but you can also find them in other places) or a real white dog if you have one. Maybe carry around with you a magnifying glass as an extra touch.

What else can I say, but… “Great Snakes!”

10) Elastigirl from The Incredibles And last, but not least, it’s Elastigirl from The Incredibles (or Violet if ya got a different hairstyle). For this, here’s what you can do: you can print out the “I” and paste it on the shirt, get the black mask, a right red long-sleeved shirt, some long black gloves, red leggings, black long boots, either black shorts or an alternative to wear over the leggings, and something for the orange belt.

See? You don’t have to buy the full outfit for this costume. And you can even find some of these items in your own closet. You’ll look, dare I say it, Incredible!

So, there you have it. A bunch of DIY costumes for any lady who doesn’t want to spend too much, yet still look amazing and creative.

And as another Halloween treat for all of you, here’s the Halloween Special with our favourite characters from Shrek. Shrek says that he and his ogre family are the Kings and Queens of Halloween, so he and his friends decide to put it to the test with some spooky tales. I just found all the characters and the movie references hilarious! Hope you enjoy it too!

I wish you luck in your costumes, and I hope you have a fun and spooky night!

Next post "We Gotta Get Out While We're Young..." An Argument for Born to Run