Bleached – Dead In Your Head

I discovered Bleached just a few days ago when I was checking out the website for their label, Dead Oceans.

The snapshot of the video for Dead In Your Head caught my attention straight away with colourful visuals behind the vintage tinted silhouette of the lead singer and guitarist, Jennifer Clavin. That looked way too cool; I had to watch it. Indeed, I am way too influenced by appearances, but I was right making the assumption I’d like it… The video mixes colours, patterns, tints, comic-style icons and drawings animated to the music (not to mention that the ladies have really cool outfits). Not necessarily exceptional at an age where music video directing is the ultimate art, but still tasteful, eye-catching and creative.

And watching this video was also the opportunity for me to discover Bleached’s music!

There were two times in my life when I considered playing in a band (which instrument? you tell me…). The first was when I was 12 and had seen Freaky Friday (the Lindsay Lohan version) for the first time. I really got into the girls’ band vibe and started worshiping Halo Friendlies and picturing myself on stage with zebra nail polish, fluo green tights and violet hair. The second was when I was 15, my best friend and I met two other girls at a “Rock’n’Roll Friday” gig featuring the head bands of the “Baby Rockers” – youth cultural movement that took place in Paris between 2006 and 2009, when teenage boys would go on stage to shout about sex in bright skinny jeans – and the four of us decided that we would crush the Plastiscines and do our own band: “The Boob’s”. Of course, this never happened.

Sorry for going overboard, my point is actually that Bleached reminded me of that feeling. There is something cool and unconceited emanating from their surf-punk sound, something like the soundtrack of a holiday with friends involving road tripping and falling asleep on a deserted beach. If I could play any kind of music, I would play this kind. Nothing too dark, pretentious, sexual or cheesy, just something that makes you want to smile and dance, but still kicks ass.

Check out the video for Dead In Your Head:

Bleached’s debut album Ride Your Heart has been out since April on Dead Oceans; check it out, it’s some hell of a ride! 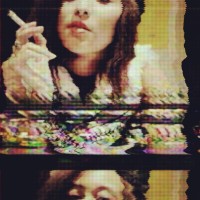