The University of Cape Town is a marvellous institution housed in a collection of archaic buildings exuding the mysteries of knowledge and secrets of decades gone by. The Hiddingh Campus – the first location of the university – now finds itself in the centre of the city, a little bundle of treasure amidst the modern landscape. The Fine Arts and Drama Departments of the university call this campus home and, quite fittingly, so do a number of theatres. The theatres themselves, like the rest of the university, hold that special charm – mysteries, secrets, tales of ghosts and hauntings, and a sense of seclusion that is absent from larger and more modern theatre houses.

The Intimate Theatre, one of the Hiddingh theatres, is exactly what its name describes it to be – intimate. It is a small, dark space accessible through back alleys and archways, lit by red fairy lights. The foyer of the theatre is decorated by posters of the hundreds of plays that have been performed there. The performing space itself is cosy, with the seats rising to the back and the floor in front used as the stage. It doesn’t get any more intimate than this. Audiences experience snippets of life that theatre lights illuminate in the darkened space and they become intricately involved in the lives, romances, laughter, and tortures of the characters below.

The show running at the Intimate Theatre at the moment is Lady Luck, a new original play by the award-wining Sugar-daddy Theatre Company, and one promising to be much darker than the Sugar-daddy plays I have experienced before. Due to my own personal involvement with the Sugar-daddy Theatre Company – I had read a great deal of the script before going to see the play and I know both the writer and the actors personally – I will not attempt to offer a review of the play. I knew all about it, after all, and had witnessed aspects of it from inception to final completion, and went to see it over the weekend armed with a barrel of prior knowledge. And yet, somehow, I was still not quite prepared for what awaited me behind the closed doors of the Intimate Theatre. Lady Luck tells the story of Lisa, an exotic dancer, torn between two men, the rich and powerful Nic and her troubled ex-fiancé, Dean. The events unfold in the dangerous underbelly of Cape Town, a world of gambling, murders, and fast cash, and numerous twists in the story left the audience gasping and astounded at regular intervals. As mentioned, I had read parts of the script before, but seeing the play performed at the Intimate brought it to life in a manner I could not have envisioned. Yes, the subject matter of Lady Luck is dark and heavy and the actors bring that intensity to life in their performances, but it is the haunting space of the theatre itself that adds the uncanny undertones that leaves the darkness and heaviness of the play lingering a little longer.

The theatre is dark and intimate, intensifying the dark and intimate subject matter and allowing the emotional intensity to reach peaks that might have been lost in a larger theatre space. Like the lens of a camera, the audience can zoom in on every single detail and intimately witness all those intricate moments that give the play its depth and range. Experiencing Lady Luck in the Intimate was not a regular theatre experience. This was the emotional intimacy of film captured in a live performance. Film Noir becoming Theatre Noir. And like the haunting image of a femme fatale creeping through the celluloid images of the 1940s, the final image of the play plunged into darkness becomes imprinted in the minds of audience members.

Oh yes, I thought I knew what to expect. But little did I know to what extent the darkness of the play would come to life, and I’ve been left wanting to delve into that emotional darkness at the Intimate once more while the play is still running. 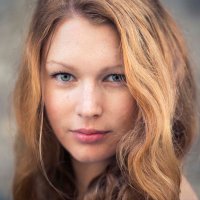