VMA Drama… Rihanna & Chris Brown – How could she HUG him?

For the past week, there has been a buzz about the hug (and ‘friendly kiss’) shared by Chris Brown and Rihanna after she won her award for Best Female Video. There were some, who like to call themselves ‘Chrianna’ fans (must… not… throw… up), who were rubbing their hands with glee at a possible reconciliation. Then there were those sitting on their self righteous horses, nay, stallions, who condemn them both. Brown for being an abusive maniac, and Rihanna for being, well, put simply, stupid.

Yes, domestic violence is wrong. Yes, Chris Brown deserves punishment. And yes, Rihanna was a victim. But we need to now realise that the altercation that took place was over three years ago. Rihanna is not going to be the poster girl for domestic violence, the same way Tina Turner was not. She has moved on with her life, to the extent she has even forgiven Brown for his actions. This does not make her stupid, nor does it make her a victim. It simply means she is someone who accepts the realities of life, and moves on from there.

I am not suggesting for two minutes that we forget what happened and cheer Brown on. After the events of the Grammy Awards in 2009, he has proceeded to make a reputation as a heavily tatted ‘bad boy,’ suddenly cursing in his music and throwing very public temper tantrums (Good Morning America). Basically a complete contrast to the young, squeaky clean, R&B crooner that he started out as. If anything, it seemed that he rode on his notoriety to take his career in a different direction. Because beating a woman apparently, really does make you into a real O.G.

But perhaps we are straying from the point here. The public outrage created by a celebrity being physically abused was of colossal proportions. The mixed reaction to the public display of forgiveness by said celebrity was also of an enormous magnitude. The real question raised by this is, who gave us the right to decide whether he is to be forgiven or not? Is this not the ‘victims’ decision to make? Brown’s latest album Fortune, has been vandalised in a London store, with warning stickers. Yes, it is accurate to say he has beat a woman. But do we then have the right to then sit back and say yes, he beats all women?

The sad fact of the matter is, domestic violence occurs, sometimes right next door to us. Do we then take it upon our self righteous selves to knock on our neighbours door and tell them what savages they are? No. 9 times out of 10, we will mind our own business and not interfere. I am not saying this is right. But why then, do we grant ourselves permission to launch a tirade of abuse at Chris Brown?

The argument that he is a role model to young children, and should behave as such, is, simply put, bullshit. As parents, we should be the role models to our children. If you are allowing your children to be raised by pop stars they have never met, and probably will never meet, then there is something seriously wrong with you. The only importance celebrities have is the importance we, society, have given them.

I refuse to acknowledge that I am taking sides. But I also acknowledge that I have done unacceptable things to people dearest to me. And out of kindness, love or simply through being magnanimous people, I have been forgiven. That is not to say these people are stupid, or would allow me the liberty of wronging them again. But they, like Rihanna, simply do not want to live their lives in anger, and would rather move on. But if you would like to sit and simmer and be spiteful for these forgiving individuals, go right ahead. Let me know how it works out for you.

Next post The Horror Paradox - Why watch horror films? 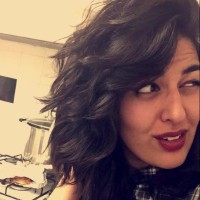 About the Author Farsa Chaudhry