To Feed The Beast

It’s been said that the first step to recovery is the realization and admittance of the problem, so…here we go: I admit! I have a problem! A big fat cat named addiction. You see it is difficult for me to keep away from coffee, gadgets, music, quality TV dramas, animation, good books, peppermint tea and the smell of freshly washed clothes. Oh, and also, on top of all that, I just might be an international travel slut! Nono, not a hooker! I just casually cheat on London with other cities, but always come back home to this foggy town.

However, this hasn’t been high on my list of distractions until recently.

About 7 months ago I decided to go a bit loopy and start doing a MA. In all fairness, this might have been one of the most suicidal decisions I have ever made in my adult life. And it hurts to admit that I might have given up all joy for a year. My commitment to all this made me think though – when was the last time I had a fix? Like a proper hard core trippy fix?

School papers, books and lectures seem to eat up all my time, so this hungry soul of mine is left standing there staring into distance and waiting for the white ship to sail to the rescue. Right there and then I decided to have a little experiment and find out if it is possible to feed that hungry creative beast of mine in just mere 10 days. I thought about as many cultural things as I could and what my wallet could take. Finally I narrowed the selection down and decided to have a breakfast, a snack, a lunch, a dinner and a dessert for that little week and a bit.

Please do forgive me this, but I really do love my food.

In order to start my little experiment with the best possible vibe I decided to have a proper breakfast. As they say – it is the most important meal of the day. So I took after this belief and went to see young French soul genius Ben L’Oncle Soul at Koko London. I could have not chosen more wisely. It was like a poached egg on a breakfast muffin served with perfectly smoked salmon and a wonderful cappuccino on the side. It’ s easy to fall into this world and just sit and enjoy until you get full and need to move on. The musicians and the show were something that would make the most depressed person in the world smile sincerely and skip on the streets like a giddy little schoolgirl.

The funny thing is that the realization of what you have found comes later. Once you have left the venue and let it sink in before you fall asleep at home. It’s like finding a rare coin and not realizing you own something so valuable until someone else points it out. The same is with New York, Berlin, the little villages in Italy and all the other places I cheat London with – it only hits you when you need to leave.

But that’ s enough for breakfast, because couple of hours later I will need a snack, right?! So dipping my big toe into cold water to test the temperature I move on to the next chapter.

Couple of days later, after my most important meal of the day, I received an invitation to have a little snack on my official lunch break. Lovely little muesli bar type of snack. A bit of fruit, a few nuts and topped off with some nice maple syrup. Just a little 10minute stroll down to Wallace Collection to see some old paintings and even older armory. It was rather bizarre little trip into something so much out of this world it left me wondering about the level of talent people had back in that time. It’ s funny how your brain reacts to such a different little splash of culture.

It did make me little quiet and maybe even scared of what I saw. It seemed to be almost too much glitz and glitter for my taste, but it definitely re-adjusted my brain on to a completely different wave. One is for sure – I would have not wanted to live in that century! My love for modern gadgets is way too powerful to resist the urge for time travelling to the future.

I am not completely sure which is worse in life – to be cheating on mental or physical level. For some reason, I tend to tilt towards belief that mental betrayal, if I may say so, is way worse than any form of physical act. So I accepted the temptation to walk the slippery road of that mischief and take a chance on something completely different. This will bring us to lunch and for that I chose the theatre, but not the traditional West End musical or some serious drama piece. I wanted more. I always do. “This is an experiment after all!” I kept telling myself.

I was lucky to find out that the Filter theatrical production company is working together with Lyric Hammersmith and for my delight they were doing interpretation of Shakespeare’ s Midsummer Night’ s Dream. Doesn’ t this just tickle the fancy and curiosity in you? It sounded amazing and you know what – it was absolutely hilarious. I am pretty much convinced Filter company and Lyric should get married and have loads of beautiful theater babies from now on. Fact! This show was something I have never witnessed before in my life containing Shakespearian language, modern twist, food fight on the stage and a brilliant scene with Nintendo battle that left me chuckling on my seat struggling to catch a breath. Would I have still gone to see it before deciding to pursue my plan for cultural fix? Probably not.

When we think of dinner, we think of a treat of the day. Something we look forward to the whole day. All the rest of the meals of the day seem to just get by in a sense and we don’ t mind that much if they go wrong. But with dinner….dinner has to be worth of that anticipation of culinary orgasm and smooth taste of that glass of Shiraz. Our dreams and worries of the day collapse with the first bite. And I went after a proper one with a starter and main course.

I have to say – the first bite stung my tongue with some strong French mustard. Les bien- aimés at Curzon Soho was the perfect bite of delicate French cuisine with just enough creamy flavor to it. At first a bit too strong for my liking when it comes to open sex scenes and continuous smoking, but let’ s face it – it wouldn’ t be a proper French film without those elements. Add some family drama, death, suffering and complicated relationships wondering about what is wrong and what not and you get European cinema. Obviously, this is a major generalization, but in all fairness, quite true one. The strong undercurrent of the film talking about relationships and doing the right thing left me wondering about how I live my life for long after I left the screening room. I suppose it is true when people say that one’ s wrong is another one’ s right. And the best thing in all this was that for the main course we got Catherine Deneuve herself served to us at her best. Just few feet away, sitting on the stage and so charmingly talking about infidelity.

What more could I possibly do to top off all the past week?

Is there even such thing? Seems like I managed to cover all fields of art. Should I go for a double bill? Maybe?

Double bill in music it shall be. I think music could just be the best creation by human kind. From soul to hard rock to pop music and finishing with symphonies – it is all we could ask for and even more. After I walked out of the Barbican Centre and London Symphony Orchestra’ s concert I found myself thinking – it’ s true, love really is everywhere, like they say in that film. Walking down the cold streets of London I realized I was finally full. Actually ready to roll down the hill and not eat ever again. My little stubborn soul is now obese and needs to go on a diet. The only trouble is, once you get the taste you just want to go back for more. Correct me if I’m wrong, but human nature is weak and powerless what comes to life’ s wonders.

Giving these 10 days up felt almost like trying to quit smoking. You know it is bad for you and you need to shape up to go on with life and things that need to be done, but let me ask you something – don’ t you just want to take that one more cigarette, light it and smoke it…and then another one and then one more until the pack is empty? To really smoke that damn thing to its very bitter end?

We are masochistic by nature and as flawed creatures that need someone to come and pop our little pink bubble and bring us back down to reality, we crave for more.

One thing I did realize was that the multicultural zebra of creative mind food that seems to run away from one, is actually not going anywhere. We just need to keep the eye on the prize and not get obese.

So what I have done (instead of reading the piles of books on South Park and on social media) is hung around at those wonderful places where the art comes together disregarding my responsibilities and feeding the ugly beast known as my soul. Is it worth to light the cigarette from both ends and let it burn until the bitter end? Does it really pay off to be broke and prepare all my lunches at home until the next payday?

So completely and utterly worth every single second and penny I spent on this 10 day experiment.

London IS wonderful even though sometimes I despise it with all my heart. It is my bitch, my lover, my child and my mother. It will make me a sinner and it will turn me into a saint. With occasional affairs with Berlin and Tallinn, it is my breath of familiar but fresh air. It’s like being in a relationship that eats you alive but makes you smile in the end of the day. It is what it is! It is love.

….and now, for the next 10 days there will be a memory of the good times and all those social media books I have yet to read. If I were Luke, I’d wish someone would send the “force to be with me”. 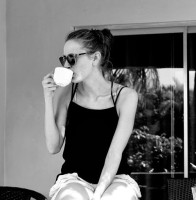