“The most powerful social sculpture of our times is made by the quiet performances of the homeless within the shelter provided by the entrances to the shops and restaurants of our inner cities.”

How do you depict homelessness in art? These are the words of Anthony Gormley who has contributed his work of art “Contract” to the Crisis Commission exhibition being shown at Somerset House. I recently went to the opening and was genuinely amazed at the talent they had pulled in. Every single work managed to effectively allow you to think about those bodies that have no place.

Yinka Shonibare’s imaginatively titled ‘Homeless man’ (!) depicted a figure dressed in colourful batik fabric and in place of his head sits a constellation globe etched with the words: “Bleak, dark, and piercing cold, it was a night for the well-housed and fed to draw round the bright fire, and thank God they were at home; and for the homeless starving wretch to lay him down and die.” Batik fabric is a motif that Shonibare often uses, reconstituting it in the form of aristocratic clothing in attempt to address the issues of post-colonialism. Once again he is referencing a Victorian aristocrat fallen on hard times, but far more pertinently he is addressing the very real issue of the recent rise in middle-class homelessness.

Gillian Wearing was hugely influential way back when I studying art. I’ve always found her ideas very invigorating – inviting us to reflect on the discrepancy between what goes on inside our heads and how we usually present ourselves in public. I went as far as spending a couple of days in Washington and New York thrusting my mini whiteboard into the hands of random strangers and asking them to write down “the first thing that comes into their head”. You’d think we would have been in the heart of the Southern Bible Belt with some of the responses: “Praise be to Lord”; “Going to church makes you happy”. Anyway I’m slightly veering off but it was a fascinating project and one that I would love to continue in various other cities around the world. Gillian Wearing’s contribution is ‘Craig’, a painted bronze and marble statuette of a homeless ex-soldier who turned to drink while suffering from Post Traumatic Stress Disorder once returning home. He was a moment of calm amongst a fairly lucid selection of works. The words “Served in Afghanistan” are written on his piece of paper.

My absolute favourite of all the works was Neeka Neelova’s series of cast doors. Each moulded on the actual doors in Somerset House and beautifully coated in a burnt charcoal. It’s a lovely idea responding to the notion of a door as a structure that opens or closes off an entrance. The doors are quite literally collapsing on themselves bringing into question concepts of belonging, separation and displacement. I would not be surprised if a museum is already eyeing this up in advance of the auction on May 3rd.

For more information or if you’d like to donate visit:

Previous post When The Dragons Fly: Ewert and The Two Dragons 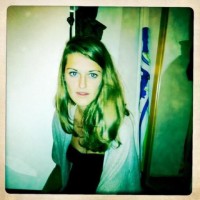 About the Author WAX ON

A stream of consciousness from a the wonderfully wacky world of contemporary art. Curatorial insights and aesthetic observations on art and design in London and around the UK. By Alexandra Donaldson.